"The Superior Court Inquest finds that Icka Withione Sycamore Tall Trees acted legally, and within the duties of his position with the Presidential Directorate in killing Afgu Withione Iztapalapa Azteca. No further legal action will be taken." A tap of the gavel. "Court is dismissed."

And found himself grabbed by an ecclectic group of his old and new co-workers, even the Ministry wonks, and hauled off for another improptu party at the house.

A grinning Keiq had summonded the Silver Grill mobile kitchen, and people kept coming. Izzo, Ox, and Ajki had brought wives and kids, all quickly mingling with Wacky and Azek's trio. Then Rael showed up, eyed the kids and turned Exzy loose.

The floors and the one finished staircase were admired, the dome room admired, a few jokes about how badly he must rattle around in a single room double the size of his apartment and what was he going to do with the rest of the house?

"Ignore it, except when it gets cleaned in advance of a historical society tour?" Ice shrugged. "It's been fun, stretching my magical building type skills to do it. But I can't imagine any situation in which I'd use all of the top floor, let alone the whole house."

Dave looked over and shook his head. "Don't you know better than to tempt fate by saying things like that?"

So which of Xen's Oner daughters should be in trouble? AKA captured by the Drei Mächte Bündnis and in need of rescue?

Ryol, Gior, and Voyr are all XR gatemakers. Ryol is volital enough to have gotten into trouble, but would A hoity-toity Young woman be more likely to assume rules were just suggestions?

Ice could see the Cyborg guard going through the mental list, even as he glanced aside at a detector to read the ID tag that everyone had implanted. Or in Ice's case, in his pocket.

He waved Ice through the checkpoint.

Ice cringed just a tiny bit as he walked past the man. Left arm amputated, replaced with a cybernetic arm. Rather than making an effort to cover up the prosthetic, it was deliberately open to the gaze, rods, wires . . . built-in laser pistol. The right eye "augmented."

But it was the coppery metal plate set into the shaved scalp that gave Ice the chills. Screwed in to the skull. "Wires" that grew into the brain. That delivered orders and could cause pain. The made it easy for a mentalist to take possession of a body and use it however he wished.

Or she. Mustn't be sexist. Just because 99% of the controlling Mentalists are male.

The female mentalists are generally either infiltrators or broodmares. Only a few have made it to the Three Hundred. The representatives of the top hundred families from each of the three original nations who formed the Drei Mächte Bündnis.

Three blocks on, turn right and keep going for eight blocks, where the road ended at a concrete wall with a metal gate. All properly labeled, of course. The government had too many control freaks to not want everything properly labeled.

Municipal Water District #3, gate nine, unlocked at a spell and he heaved it open.

Despite getting into the role, I don't think I'll submit a work order to get the hinges oiled and dirt cleared from around it.

He closed and locked the gate behind him, and tools over his shoulder, headed across the rough cut grass for the water tower. This job would be a lot easier if they didn't have so damned many of these things!

The people running the project had finally had to limit the sabotage to the central areas around the government buildings and the gate facilities. Hitting only their Hub Worlds.

The Home World of the Drei Mächte Bündnis they'd flooded with the nano repair units. Microscopic organic machines that would locate a specific chromosome, and check a particular sequence for a mutation and repair it. Returning it to its proper working condition.

And destroying the individual's ability to collect power for magic.

Ice closed his eyes and checked . . . damn, the warm spots of living animals headed his direction. There weren't alarms on the gate, so there must be motion detectors or just security cameras. He stopped to get a good recognition point, then kept going, angling slightly away from the tower base and toward the water treatment plant.

He caught sight of the men coming, and walked on for a few steps, to make sure they saw him, then then dropped his tools and ran. Past the tower and threw the unlocking spell at the first door he spotted. Threw himself through the door, locked it behind him, and ran, weaving past pumps and valves and whatever. Through another door, warping light . . . getting behind machinery to pickup another recognition point and teleported back to the coarse grass , and, light warp in place, trotted up to the water tower, circled to find the access door and let himself inside.

He closed the door leaving utter darkness. No, not complete. There were some tiny red lights below him.

He pulled power and compacted it to form a light

A metal mesh floor, pipes and valves in sight below. Electronic controls, the source of the red lights.

Otherwise, white walls, spiral stairs, two white painted pipes coming up through the floor and soaring into the dark above.

"Perfect." His voice echoed off the metal walls, and his footfalls as he walked up to the side pipe.

Teleportation was an interesting ability. One had to have a good idea of where one was, where one wanted to be, the complex spell itself that bled velocity and changed orientations, as well as location, and then one had to activate it by pouring a lot of power into it.

The flow of power had to go from the current location to the destination. And what traveled could be quite variable in size and mass.

And interesting consequence of that was that, in moving small objects small distances, one could "recognize" an area, oh, say an arms length around oneself. And use a small part of it as a destination and then specify what was traveling. Like a handful gel-caps full of gene repair nanos.

Ice leaned on the pipe that brought water into the Tower. Recognized his surroundings and teleported the nanos into the pipe. Rubbed his forehead at the incipient ache.

Stepped away to teleport back to a distant . . . the spell dimmed, the recognition points faded . . .

Looked around. One door. One staircase winding up and up . . . one hatch to the pipeworks below. Ceiling low, not much room. Who knows where it goes?

He looked mentally outside. No one was actually placed to see the tower door. He dug into his pack, pulled out the nearest food pack, grabbed the little packet of pepper and ripped it open. Opened the tower door enough to step through and sprinkle the pepper around. Slid back in and closed the door. Locked it. Retreated to the far side of the circular room and grabbed a drink from the pack. Local product--bought before he'd started spreading his nanos-- and drank. Felt the sugar hitting his bloodstream, and the headache faded.

He snuffed his magic light and when the locked clicked, he warped light around himself and stood still as Cyborg guards circled, footsteps echoing, no sound of voices. They flashed lights around. Some headed up the stairs, some peered through the mesh floor and pried up the access hatch and dropped out of sight.

Briefly. The pit must have been small. The Cyborgs climbed back out of the hatch, shutting it neatly behind them. Stood there, not even looking around until the echoes from above got louder and those Cy's returned as well. Then they marched out as a group, closing and locking the door behind them.

Ice sat down in the dark, searching his pack by feel and hauling out food and more drink.

Well, that was just five out of thirty water towers in the downtown area. But, per orders, when discovered, return home immediately. There are always more worlds in need of treatment.

Just three of us allowed to do the dirty work, Powerful enough mentally to deal with the very strong mentalists, should we ever find ourselves confronted by one.

Thirty or forty hub worlds each, over the next few years, and voila! The Drei Mächte Bündnis is grounded. Or at least crippled for a generation. Because there's simply no way to cover an entire planet. We can only hope to remove magic from a sufficiently large chunk of the most powerful and hopefully disrupt their governments.

Or at least their gate-making ability.

So as soon as I get some energy back, I'll teleport back to the gate and head home for a couple of weeks before I head out again.

:: Ice! We've got troops down the block! :: His support team on the far side of the gate included a young woman who could open the Comet Fall style gates, and who had no business stepping through that gate.

Ice reached for the teleport spell. It slithered out of his grasp.

:: Close the gate. I'll head for the secondary pickup location. ::

A faint impression of a confused fight, then nothing. 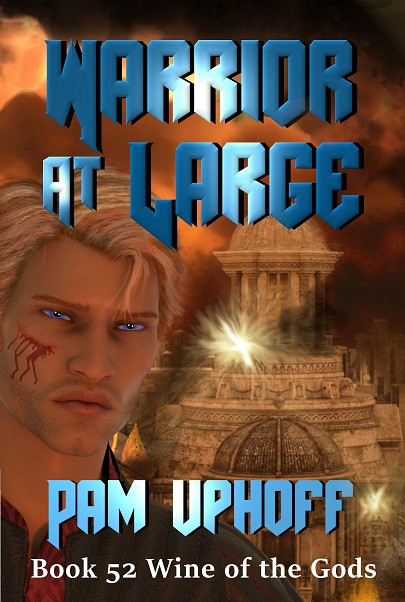